I am pleased to announce I have a track on this wonderful compilation. Psych Against Cancer is a 76 song (!) compilation raising money for Macmillan Cancer Support.

My track is a live version of Syzygy (from the Drone Rock Records album, The Silence That Follows) recorded by Andrew Binnie at the The Cube Microplex on the 9th October 2019, the first night of my most recent European tour.

This is a charity close to my heart, having lost my dad to cancer 7 years ago, I have seen first hand the amazing support Macmillan nurses provide. The money raised from this compilation will go to a very worthy cause, I urge you to dig deep and enjoy this mammoth compilation! in the past 2 weeks £2700 has already been donated from this comp, go dig in!

Excited to announce I shall be playing some shows across Europe this Autumn. Tour dates and links to events below. Event links being added all the time so check back.

Big thanks to Bandcamp for including ‘The Silence That Follows’ in their album of the month. Read below what the have to say about it.

“The Silence That Follows caught my eye a few weeks ago, on one of my usual scrolls through the ambient tag. From my first listen, it quickly rose to become one of my favorite releases of the month, excelling especially in the clarity of its higher frequencies. A large portion of the album is constructed around a continual interplay between guitar loops and synthesized pads, but Stereocilia isn’t afraid to journey outside of this formula; the interesting drum patterns in “Syzygy” before the introduction of the distorted guitar is a unique moment of reflection before the utter power of the track is revealed. Towards the end of the album come less abrasive tracks, including the epic “Celestial Light,” which takes up half of the album’s runtime. This is a walk through a variety of electronic timbres, and the guitar which dominates the latter half is probably my favorite element on the entire album.”https://daily.bandcamp.com/2019/05/02/best-new-ambient-on-bandcamp-april-2019/

First shows of the year coming up, hope to see you there!

The special edition is now sold out but there are still about 25 copies left of the purple version over on Bandcamp. The cd version, released on Echoic Memory can also be found at Bandcamp

Greetings! I’m happy to announce that my new album, ‘The Silence That Follows’ is coming out on Drone Rock Records.

“The next release on Drone Rock Records sees the welcome return of Stereocilia, AKA Bristol based composer and drones/loops extraordinaire John Scott. His debut vinyl album, ‘Hive Mind’, released on DRR back in October 2017, was a personal favourite and captured a core essence of the kind of music I sought out to represent when I started the label. ‘The Silence That Follows’ is a phenomenal and truly atmospheric follow up which explores new territories and themes but could still essentially be viewed as a companion piece to ‘Hive Mind’. This is an album to be lost in as it transports you away in a droney bliss.”

“…it brings remeniscence of something familiar yet slightly out of grasp, like warped super 8 clips of good times past. Close your eyes and let the soothing sounds guide you. Stereocilias’ canvas is your universe, the painting is your soul.”

“a dense, hybrid ambient mess of nothingness which pulls you into its void and encompasses your very being…. a true cathartic experience which turns into a beautiful cinematic sound-scape.”

‘The Silence That Follows’ is a limited pressing of 300 copies available in two variants both featuring the gorgeous artwork by Sarah James on Drone Rock Records:

150 copies pressed on purple vinyl with black and pink splatters.

‘Verglas’ is the first track of ‘The Silence That Follows’, watch the video here

ate and myself have uploaded our tracks from our tour tape onto Bandcamp. The last copies sold out this morning before we had chance to share it around. However you can still purchase the downloads

I am also having a sale between now and the 31st December, 25% off everything (physical and digital) simply enter “winter” into the discount box on Bandcamp https://stereocilia.bandcamp.com/ 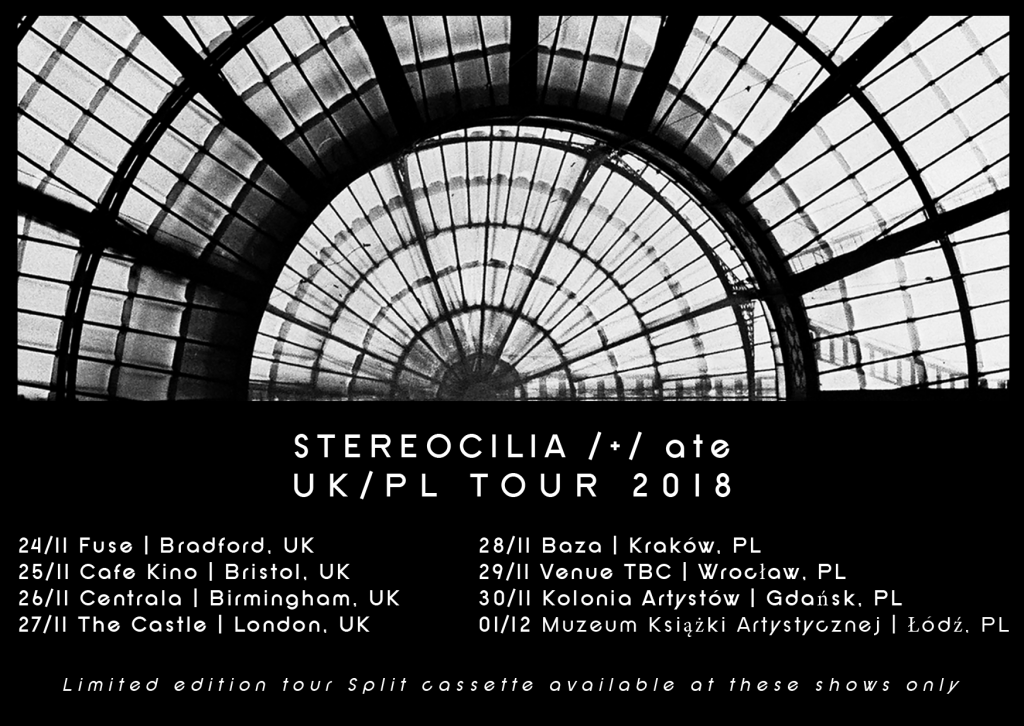 Happy to announce a joint tour with Poland based musician, ate, at the end of the month. Petar and I will play 4 shows in the UK and 4 in Poland, details on the events below. We will also have a limited tour only cassette, so be sure to come along to pick one up!

I also have 3 others shows coming up for the rest of the year, the last being with Agathe Max performing as Winter Ghost.

My new album, Wormhole is now available to purchase/download via Bandcamp

“Whilst on my 3rd European tour in April 2017, I spent 3 days at WORM Studio, Rotterdam, with their large collection of vintage synthesizers and drum machines. I had two plans for the studio time, the first was to record the synth parts to my then upcoming album, ‘Hive Mind’ (Drone Rock Records, 2017) the second, was to spend as much time improvising and exploring these machines, most of which I would probably never get another chance to play on.

I came away with close to 3 hours worth of material from my time at WORM. The tracks presented here are all improvised, with no overdubs. The last track on ‘Wormhole’ was recorded on my final evening in the studio. I set up 9 synths, a drum machine and my guitar and did a live Facebook video stream. The video is now available to view here youtu.be/wqUgnEgjU-E ”

The cd version is a limited 4 panel gatefold CD, with an 8 page booklet. 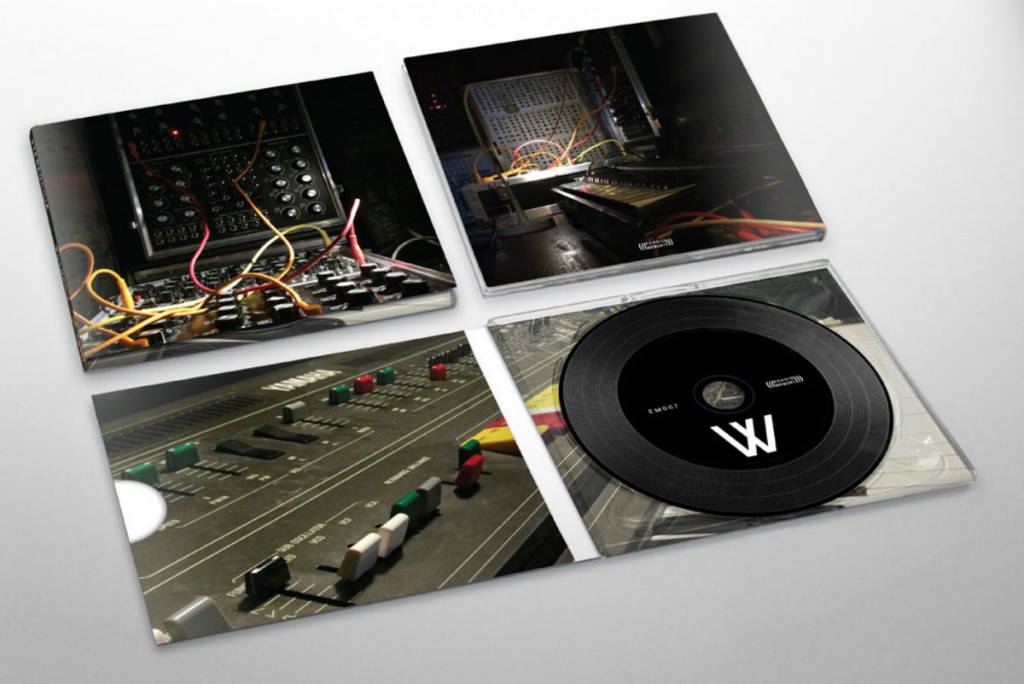 Pre-Order over on Bandcamp

My next Bristol gig will be a Wizzarding Promotions gig, supporting Dutch Psych heads, Radar Men from the Moon on the 23rd May. 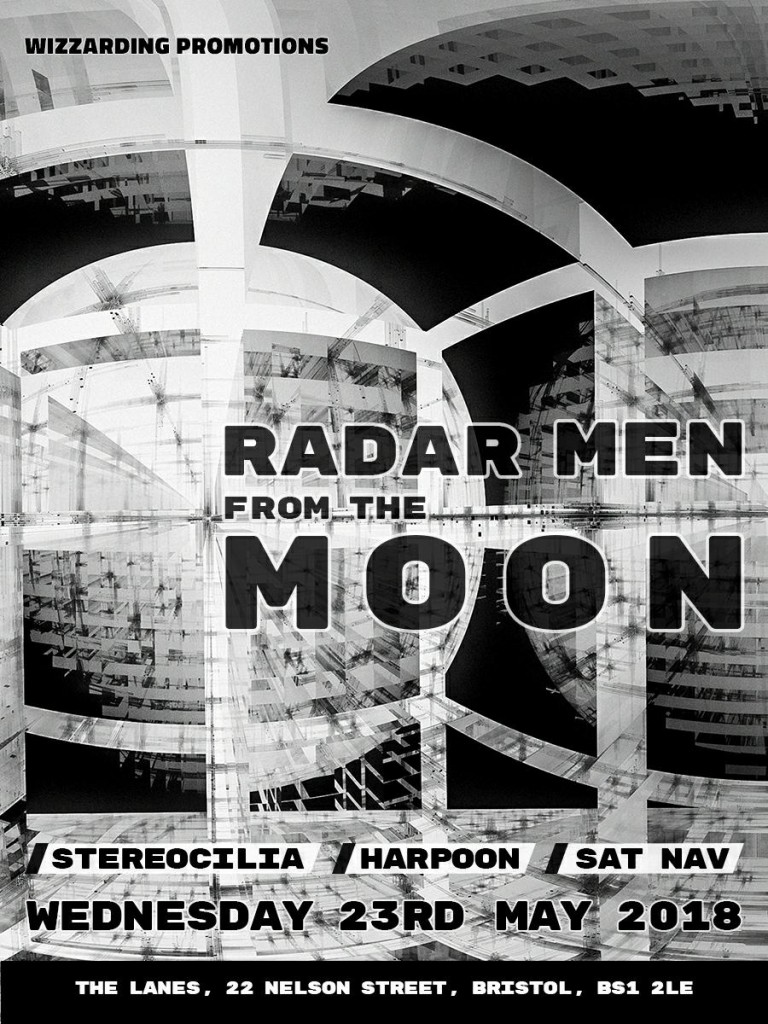